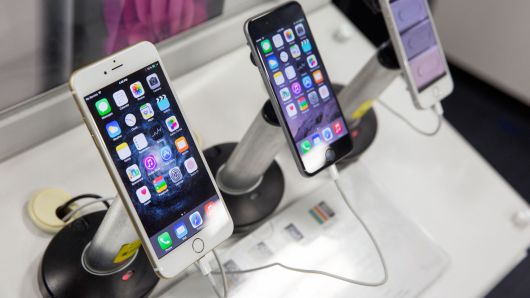 Apple’s slowdown in China could mean bad news for Best Buy, according to one analyst.

The iPhone maker cut its sales forecast Wednesday — a rare move by the tech giant — calling out weak sales in China and a trade war that’s levied high tariffs over the last several months across hundreds of products and commodities sold between the U.S. and Asia. Apple’s stock then cratered as much as 10 percent Thursday, closing with its biggest single-day loss in six years, as investors started to question the broader implications of this announcement.

UBS has estimated that roughly 15 to 20 percent of Best Buy’s total sales are of Apple products, which tend to sell at higher price points than other merchandise in Best Buy stores.

As recently as last month, Best Buy has argued its relationship with Apple is still going strong.

“We’ve built over the years a very unique experience selling Apple products,” Best Buy CEO Hubert Joly told analysts on an earnings conference call. “Apple would say … Best Buy provides the best retail experience for their products and services outside of their own home.”

Best Buy has about 900 Apple stores within its stores in addition to roughly 3,000 employees who focus solely on selling Apple devices.

Joly added that “it’s unclear at this point what the net effect is going to be” for Best Buy now that Amazon is starting to sell Apple devices on its website. But this remains a top concern for the retailer on Wall Street, moving forward.

As Apple looks to sell its iPhones and other devices through Costco, Amazon and other distributors to boost sales growth, it will make it harder for Best Buy to maintain its own sales gains, Lasser said. He compared the situation to when Under Armour started selling at Kohl’s, hurting sales of the athletic apparel brand at Dick’s Sporting Goods. “Apple’s moves might not be as draconian for Best Buy,” he said. “But, they do illustrate a risk.”

Best Buy shares closed down more than 2 percent Thursday. The stock has tumbled 23 percent from a year ago.

Other businesses in the U.S. ranging from Ford to Tiffany have already started flashing warning signs about the Chinese economy.

“Given that concerns around global demand have been a primary driver of the mass sell-off last year, it seems fair to assume that any further indications of slowdown in China should simply add fuel to the fire of fear,” Nomura Instinet analyst Simeon Siegel told CNBC.

Goldman says Netflix is one of its favorite trades for 2019, sees nearly 50% comeback.>>> cachettrading.com
Lauren Thomas