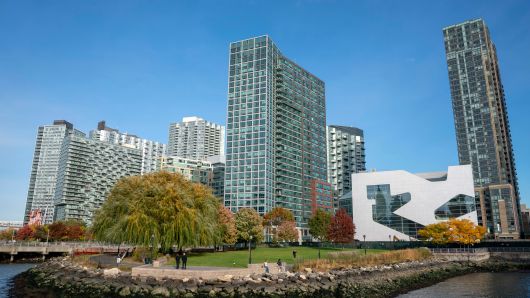 New York City’s deputy mayor for housing and economic development, Alicia Glen, told CNBC on Friday, her last day in office, that she’d like to see more women running big companies — and if that were the case, deals like the now-scuttled Amazon headquarters plans for Queens might have different outcomes.

“Maybe if there weren’t all these men running companies we would possibly have different results,” said Glen, whose office spearheaded the Amazon HQ2 deal that fell apart last month, in the face of local protests led by liberal politicians such as freshman firebrand Rep. Alexandria Ocasio-Cortez.

Last month, New York State Sen. Michael Gianaris defended his opposition to Amazon’s HQ2 proposal for the Queens neighborhood of Long Island City. Queens is one of the five boroughs of New York City. The others are Manhattan, Brooklyn, The Bronx and Staten Island. “Amazon needs to get ahold of what they mean to communities, and act responsibility,” he told CNBC at the time.

However, many other New York politicians and CEOs are trying to get Amazon founder and CEO Jeff Bezos to change his mind. They wrote an open letter, which appeared in The New York Times, saying a “clear the majority of New Yorkers support this project.” The effort, paid for by the Partnership for New York business group, said Democratic New York Gov. Andrew Cuomo “will take personal responsibility for the project’s state approval,” and Democratic New York City Mayor Bill de Blasio “will work together with the governor to manage the community development process.”

William Ford, chief executive of New York-based growth equity firm General Atlantic, told CNBC’s “Squawk Alley” on Friday that the city’s letter to Amazon does not seem needy. Ford, one of the signatories, said the message to Bezos is, “We want you to reconsider.”

Glen, whose departure was announced in December, told CNBC that the city remains committed to the original Amazon deal, which included city and state performance-based incentives of about $3 billion. Those perks were at the heart the deal’s opposition. However, Glen said the incentives offered by the city are available to any company that wants to bring operations to Long Island City.

“That is where the mischaracterization and misinformation about the basic deal continues to be in the ether,” Glen contended. But she did acknowledge that the state’s incentives were specific to Amazon.

Emboldened by Amazon pulling out of its New York City headquarters plans, activists in Virginia hope to stop the e-commerce giant’s deal for Arlington, just outside the nation’s capital.

Carter — whose district covers parts of Prince William County and the city of Manassas, about 30 miles west of Arlington — said the unemployment rate in Northern Virginia is already “extraordinarily low.”

“What we have in Northern Virginia is not a crisis of joblessness, we have a crisis of affordability. When you are cramming in 25,000 new positions into an area like that that means there is going to be a parade of U-Hauls coming down the highway. You’ve got 25,000 new families competing for the same housing stock.”

People trying to make ends meet are already seeing 20 percent increases in their rent “before a single shovel has hit the ground,” Carter said, adding he favors growing employee-owned businesses rather than “chasing after these projects that are handed down to us by billionaires.”

Arlington County Board Chairman Christian Dorsey, a supporter of the Amazon deal, told CNBC in the same interview Friday, “The very notion that saying ‘no’ to Amazon makes it better for potentially employee-owned businesses to thrive is factually incorrect.”

Dorsey said business activity from a project like building an Amazon headquarters in Virginia will create opportunities for small-business owners. “You don’t get that from stagnation.”

The Arlington County Board is expected to vote later this month on $23 million worth of incentives to Amazon. The Commonwealth of Virginia earlier this year already approved up to $750 million in performance-based perks.

Meanwhile, Nashville, Tennessee, which had won a smaller investment in the monthslong Amazon HQ2 search, remains on track.