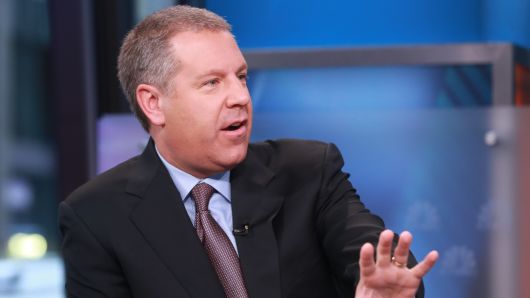 Here’s what keeps Ford’s new No. 2 executive, Joe Hinrichs, up at night

Ford Motor Co. is investing $900 million to set up both a battery-car plant — its second — and an autonomous vehicle center in Southeast Michigan, not far from its headquarters in the suburb of Dearborn.

It’s part of the Detroit automaker’s push to lead in autonomous vehicles while also trying to catch up to rival Tesla in the emerging electric vehicle market.

CNBC sat down with Ford’s newly appointed president of its global automotive division, Joe Hinrichs, in recent weeks. The company just announced his promotion in a management shakeup Wednesday along with Jim Farley, who will run the company’s autonomous vehicle and “smart mobility” efforts, among other things. Although both men will have the title of president starting May 1, Hinrichs’ job is bigger and makes him the heir apparent to CEO Jim Hackett.

“Uncertainty” is one of the things that keeps Hinrichs up at night. And he’s facing a lot of it these days. In his newly expanded role, Hinrichs will oversee product development, as well as global automotive operations — core units in the midst of radical change. Ford is pulling out of the sedan and coupe market, even as it invests billions to develop battery cars that have yet to catch on with consumers.

Like its rivals, the second-largest Motor City automaker is facing a variety of challenges. Sales have been sliding in the U.S., European operations are losing money, and Ford is reportedly considering a major shake-up of its Indian operations, to name just a few challenges Hinrichs has to handle. Now, add the threats posed by the Trump Administration’s trade wars — tariffs on aluminum and steel last year alone adding $1 billion in costs.

Here are some excerpts from CNBC’s interviews with Hinrichs:

CNBC: A year ago, Ford announced plans to increase its investment in electric and hybrid vehicles to $11.1 billion and a company statement says a “fresh look” at the potential market says it’s likely to be bigger than initially expected.

Hinrichs: We were always confident there would be growth in demand for electric vehicles. As we take a closer look, we’re seeing more acceptance. That’s especially true among millennials [who], over the next five to 10 years, will be the biggest buying group in the market. The multibillion-dollar question is getting your timing right. We’re still trying to find that. We believe electrification is a really important part of our future.

CNBC: On the same day Tesla revealed its Model Y electric SUV, Ford teased its own “Mustang-inspired” battery-electric crossover on Twitter. It’s supposed to be your first long-range model, but when is it coming to market?

Hinrichs: We haven’t given a timeline, but it’s next year, 2020, and we’re very excited about it. One of the things that often gets lost in the conversation about electric vehicles, because of the cost, is that there are attributes of a vehicle you can make better with electrification.

Along with instant torque, there’s the smoothness and quietness of the ride, the low center of gravity. There are fewer moving parts, so reliability [should be better]. And the way you can use the package gets more efficient because you don’t have all that stuff in the engine compartment up front.

CNBC: The $900 milliion investment also includes money for autonomous vehicles. What are you planning?

Hinrichs: We found a more capital-intensive way of building [autonomous vehicles]. So, we’re going to build them in a special manufacturing center the same way we produce our police interceptor in Chicago. [Ford takes a regular vehicle off the line and sends it to a special conversion center.] That allows us to produce the same number of vehicles but frees up capital for the second battery plant.

CNBC: In January, you announced what was said to be the first of several possible deals with Volkswagen, including one that could pair up your EV programs. Where do things stand now?

Hinrichs: We made the announcement on partnering on vans and trucks outside North America. Those conversations, I would say, went very well. There’s a good matching up of needs and strengths. We’re very excited about that alliance. We signed an MoU about continuing to have discussions on other topics, and those conversations are going well. There’s a good alignment and the talks are going well, which is as far as I can go.

CNBC: But Farley, who is currently president of the Americas, seemed to recently dash expectations, saying it will be hard to come together on electric vehicles because the timing of your programs is different.

Hinrichs: Timing is always a challenge when you’re talking to a partner about how your needs and programs line up. But those conversations continue to go well.

CNBC: Speaking of a changing market, the industry is in the midst of a dramatic shift from cars to trucks which now account for 70% of the U.S. market. Is there much room for more growth?

Hinrichs: I would say that it’s gone further than I estimated it would and it is still going. There are a few key contributors. The [light trucks] we offer today don’t have the compromises they did in the 1990s. Now, you don’t have to give up the ride comfort and the relative difference in fuel economy has diminished significantly.

The cost of gas has certainly had an influence. I also think our society has gotten used to the idea that devices can do all sorts of things. Your smartphone is your rolodex, your phone, your camera. Society now expects vehicles to be multi-functional, too. So, I don’t think it will stop.

CNBC: Since a management shake-up nearly two years ago, Ford has been going through a lot of changes. What can you tell us about the planned Ford reorganization?

Hinrichs: You mean the “smart redesign” we started last Fall which is really about flattening the organization and removing some of the bureaucracy. We want to let the people running each layer of the organization handle that redesign, rather than from the top down. We think we’ll get bigger insight and a bigger buy-in.

CNBC: How is that different from your broader global restructuring?

Hinrichs: We’ve already announced plans for our Brazilian [truck plant] in Sao Bernardo to close, and that’s our first big step there. In Europe, we don’t have a lot to announce because we’re in discussions with our partners, but we’re having very constructive and engaging discussions. We’ve set up our China operations as a standalone business under Jim Farley and we’re looking at everything in our China business.

CNBC: What about North America?

Hinrichs: We don’t have as deep a restructuring as in those other markets, but we’re looking at the cost structure and execution of the launch of some very important products over the next few years that will have a big impact on our business — the new Ranger [pickup], the Explorer and Aviator and Escape [SUVs] this year and then a number of incremental nameplates the next year, including the Bronco and the 300-mile all-electric SUV. And we’re keeping our trucks super fresh. In North America, we think we’re going into a really sweet spot over the next 18 months.

CNBC: We’ve heard about job cuts in Latin America and Europe, as well as white-collar cuts in North America. What about blue-collar cuts in the home market where General Motors has eliminated five plants and thousands of hourly jobs?

Hinrichs: In December we announced that both Louisville and Flat Rock will remove a shift but we plan to move those people to where we need more capacity like the Livonia transmission and Kentucky Truck Plant. So, in North America, with all the product launches coming, we don’t see substantial assembly plant changes coming in the near future.

Hinrichs: If the U.S. economy stays strong and the industry stays where it is, I don’t see dramatic changes to our manufacturing plans for this year in North America.

CNBC: But how concerned are you about the U.S. economy?

Hinrichs: This “peak auto” story has been around for several years. It wouldn’t surprise me, given where we are in the U.S. economic and automotive cycle that people are being cautious about hiring. January and February sales were down but they were impacted by severe weather. We’ll see what the spring selling season brings. It usually tells a better tale of what the year will hold. But there’s clearly a lot of uncertainty out there.

CNBC: “Uncertainty” is a word I’ve heard a lot from you and other industry officials lately. Are we in a more uncertain period than the industry has faced in a long time?

Hinrichs: It’s fair to say that we’re in the most uncertain period since the global financial crisis. We have a U.S. government engaging in trade negotiations with multiple [nations] at the same time, which is unprecedented. And there’s a very important review of [U.S.] fuel economy standards.

Given our cycle times and the capital exposures we have, we crave certainty for planning, as much as possible. So, when you add everything going on, the industry is going to get more conservative because we don’t know where to place all our bets.

CNBC: Ford is heavily dependent on the U.S. market, but don’t you have a lot at risk now in Britain.

Hinrichs: Brexit, on its own, is both fascinating and scary all on its own, because the UK is very important business for us. I’d be surprised if [a “hard Brexit”] is the probable outcome.

Maybe it’s my personality but I’m always optimistic that, at the end of the day, people will find a resolution because it’s in nobody’s interest for there to be a no-deal Brexit with chaos. But sometimes these things happen.

‘Make it simple. Make it memorable. Make it inviting to look at.’ – Leo Burnett, on Advertising