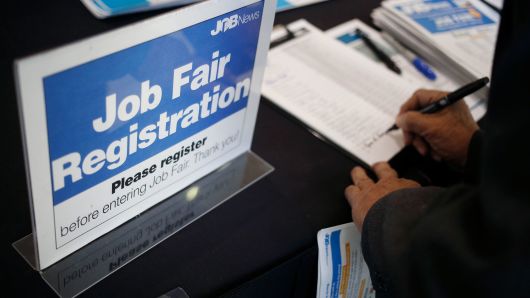 The number of Americans filing applications for unemployment benefits fell less than expected last week, which could raise concerns that the robust labor market was losing some momentum.

Initial claims for state unemployment benefits decreased 2,000 to a seasonally adjusted 228,000 for the week ended May 4, the Labor Department said on Thursday. Data for the prior week was unrevised.

Economists polled by Reuters had forecast claims falling to 220,000 in the latest week. The Labor Department said claims for Indiana were estimated last week. Claims have been volatile in recent weeks because of the different timings of the Easter and Passover holidays as well as school spring breaks.

Still, last week’s smaller-than-expected drop could be pointing to some slowdown in the labor market. The four-week moving average of initial claims, considered a better measure of labor market trends as it irons out week-to-week volatility, increased 7,750 to 220,250 last week.

The economy created 263,000 jobs in April and the unemployment rate dropped to a near 49-1/2-year low of 3.6%, the government reported last week.

Thursday’s claims report showed the number of people receiving benefits after an initial week of aid increased 13,000 to 1.68 million for the week ended April 27. The four-week moving average of the so-called continuing claims fell 8,000 to 1.67 million.

Why TOP Platform Is A One Stop Shop For Making Money Online.

TOP Helps You Earn Money As A Social Media Influencer From Home.

4 Ways TOP Can Help You Handle Your Press Release.

Best Way To Sell Photos From Home For Cash.

3 Steps to Joining With TOP To Get Great Online Reviews.

4 Benefits For Online Advertisers Who Join With TOP

3 Steps To Getting Great Online Reviews.

The Importance Of Finding Great Photos For Any Website

Work on cell response to oxygen gets medicine Nobel.

How to trend on social media.

The Rohingya’s Right of No Return.