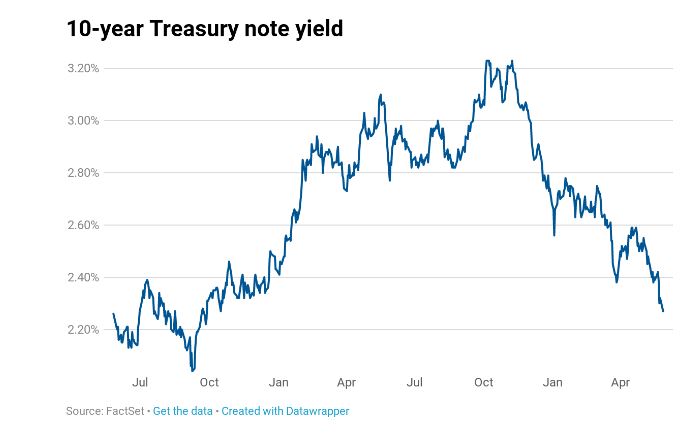 The yield on the benchmark 10-year Treasury note fell to a 19-month low Tuesday as Wall Street grew more certain that the U.S.-China trade war will last longer and afflict GDP growth more than first thought.

The U.S. bond market was closed Monday in observance of Memorial Day.

President Donald Trump said from Japan on Monday the U.S. was “not ready” to make a deal with China, adding to recent investor angst that the tit-for-tat trade war between the world’s two largest economies is far from over.

Washington and Beijing have imposed tariffs on billions of dollars’ worth of each other’s goods since the start of 2018, battering financial markets and souring business and consumer sentiment. Most recently, the U.S. hiked the tax rate on $200 billion of Chinese imports to 25% from 10% and threatened to imposed stricter levies on another $300 billion worth of Chinese products. 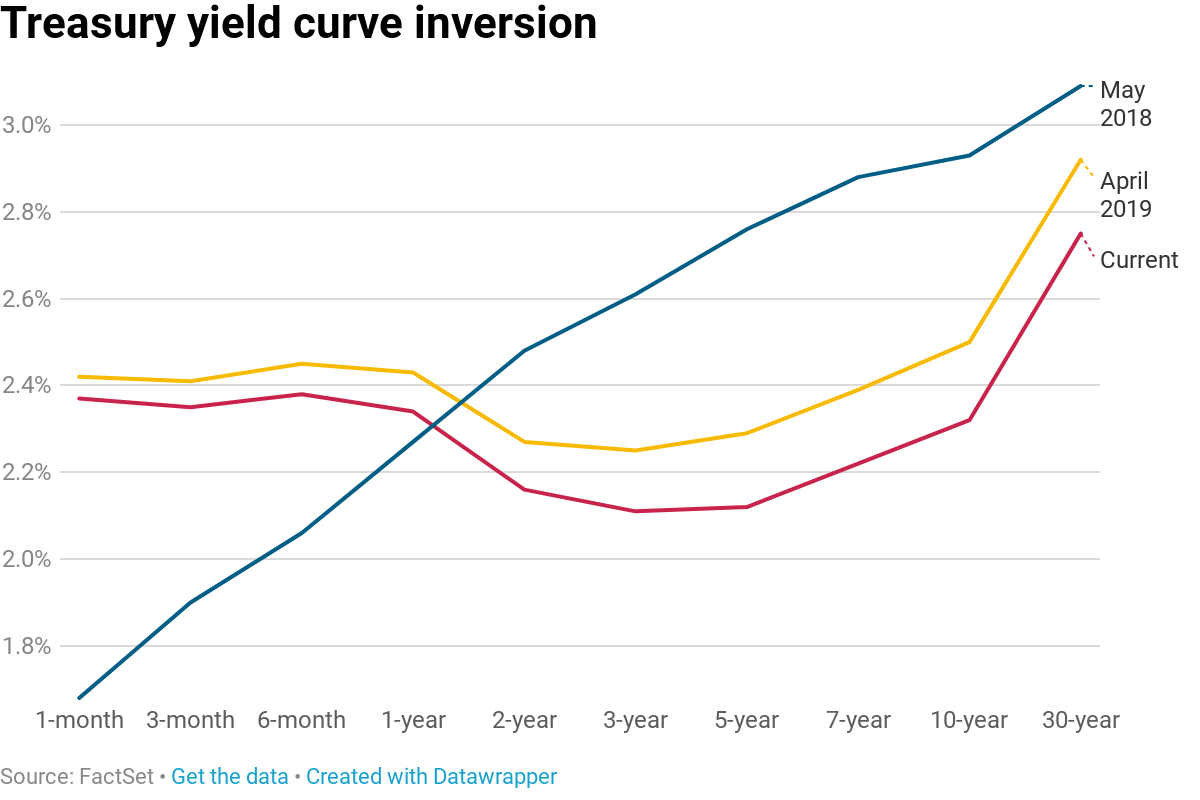 That’s kept a lid on Treasury rates in recent months as retailers, chipmakers and other trade-exposed sectors of the American economy scrambled to find new supply chains and relocate operations. But lowering interest rates — often applauded on Wall Street for their ability to encourage borrowing — may not be a positive sign in the current environment, according to Credit Suisse chief market strategist Jonathan Golub.

“Since troughing in late December, the S&P 500 has returned 20.2%, while 10-year Treasury yields have fallen from 2.74% to 2.32%. Simple math would suggest that falling rates contributed to this improvement in stock prices. However, a more thorough analysis challenges this consensus view,” Golub said in a note Tuesday.

“Higher rates from here should support further upside for equities, while a potential Fed rate cut would be less positive for stock prices than many investors believe,” he added.

A growing number of investors now believe that the U.S. central bank may have to cut its overnight lending rate later in 2019 as the waning effects of Trump’s tax cuts and mounting trade disputes weigh on economic forecasts.

Fed Chair Jerome Powell, who first said in March 2018 that “there’s no thought that changes in trade policy should have any effect on the current outlook,” has more recently voiced greater concern about economic outlook in Europe and China. Twelve months following those initial comments on the Trump administration’s trade tactics, Powell said that the weaker overseas outlook is dampening domestic growth estimates.

Investors tracked by the CME Group’s FedWatch tool believe the central bank is more likely than not to cut rates at least once by December.

The significance of influencer marketing.

A Way To Promote Foreign Direct Investments Thanks To TOP Platform.

3 Reasons That TOP Platform Is The Best Ebooks Hub.

Authors Can Make Money Online By Opting To Sell Ebooks With TOP.

2 Great Reasons To Go With TOP For Content Creation.

3 Benefits You Reap By Doing Translation Services For TOP.

One Step To Getting Great Online Reviews.

4 Reasons to Go With TOP When Searching For Translation Service Help.

4 out of 5 people on antidepressant drugs are unaware of the side effects.

Diwali “Festival of the Lights” at the Bankhead Theater.