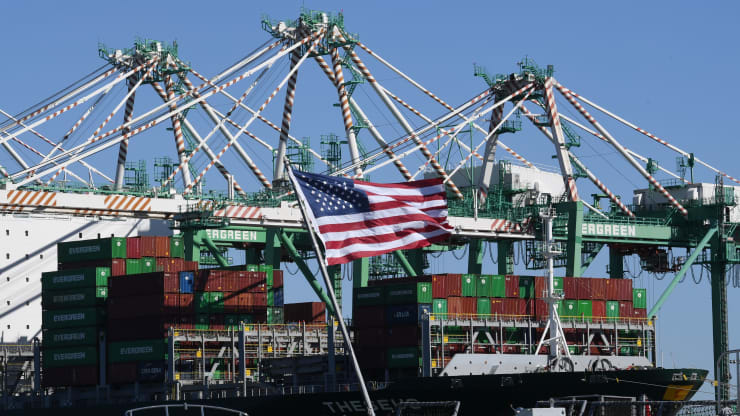 US trade deficit narrows less than expected to $54 billion

The U.S. trade deficit narrowed less than expected in July as the trade war between the United States and China drags on.

The Bureau of Economic Analysis (BEA) said Wednesday the U.S. international trade deficit came in at $54 billion for July.  Economists polled by Dow Jones expected the deficit to narrow to $53.48 billion.

China’s deficit with the U.S. decreased by $500 million in July to $29.6 billion, the Bureau of Economic Analysis said.

The data comes as the U.S.-China trade war has escalated recently. On Tuesday, President Donald Trump said it will be much “tougher” for China to strike a trade deal if he is reelected in 2020.

New tariffs on both U.S. and Chinese goods took effect over the weekend, dampening investor sentiment across the globe and sending U.S. stocks lower on Tuesday.

Trump has made lowering the U.S. trade deficit a priority. However, the shortfall has actually increased by 8.2% to $28.2 billion from the same period in 2018, according to the BEA.

The Online Publishers (TOP) is an International Campaigner and Online Lobbyist operating in over 120 countries and 65 languages.

What are the factors that affect  foreign direct investment(FDI)?

The Online Publishers TOP Platform Is No. 1 Choice for Press Release Distribution.

Want To Start Selling Your Photos Online? Here Are the Steps to Follow.

Buying Unique Photos Online From A Photos Gallery Through TOP.

Where You Can Find Ebooks To Read And Buy.

3 Reasons to Opt with TOP for Online Reputation Management Solutions.

4 Reasons TOP is The Best Option For Online Reputation Repair.

Where to Find The Best Quality Translation Services.

4 Great Benefits To Advertising With TOP.

How pay-as-you go energy systems could help with access to electricity in Africa.

Trump might not need to hear much to strike a truce with China: Senior official.

Anthony Scaramucci talks to Bill Kristol about trying to force Trump off the GOP ticket in 2020.

Who Is Winning The Offshore Solar Race?.