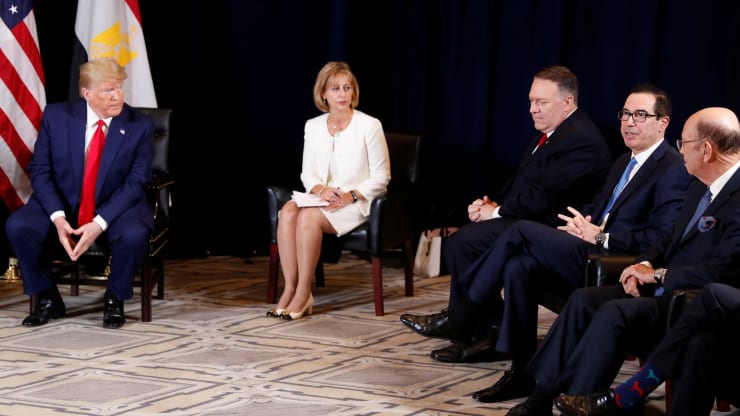 American stock market indices plunged Friday on the news of the cancellation of the visit with farmers in Bozeman, Montana, and Omaha, Nebraska, after the Chinese delegation concluded trade talks in Washington.

Trump was asked Monday how the cancellation could affect trade talks with China. The question came during a bilateral meeting at the United Nations between Trump, other administration officials, and Egyptian President Abdel Fattah el-Sissi.

“Well, they’re starting to buy a lot of our ag product,” Trump said. “But Steven, could you maybe,” the president said, referring to Mnuchin.

Mnuchin then said, “That was actually at our request they delayed that.”

“So, we didn’t want there to be any confusion. They have started buying agriculture,” the Treasury chief continued. “They’re going to reschedule that at a different time. The timing didn’t work. But that was — that was purely at our request.”

Trump then asked Mnuchin, “Why was that our request, just out of curiosity?”

The president punctuated that question with a chuckle that seemed to indicate displeasure — or unease — more than humor.

Mnuchin started to answer, “We didn’t want confusion around the trade issues.”

Trump quickly interjected, “Yeah, but I want them to buy farm products.”

Trump added, “They’ve committed to buy a lot of agriculture, and they’re going to start, and they’ve started.”

“And we should get them over there as soon as possible so they can start buying,” the president said.

Trump has a history of contradicting Mnuchin in public about various issues, including on alleged currency manipulation by China, linking security concerns about the technology company Huawei with trade talks with China, and on setting conditions for negotiations with Iran.

Trump in June said China would buy “massive amounts” of American farm products as a result of a meeting between him and Chinese leader Xi Jinping. Those promised purchase have not happened.

Shortly before the Chinese visit was canceled, Montana farmer Michelle Erickson-Jones said that it was “very encouraging to see that we expect a delegation from the Chinese negotiating team to visit Montana.”

“We have been suffering increased costs and a loss of a key export market since we first enacted tariffs and faced retaliatory tariffs in 2018,” said Erickson-Jones, who is a past president of the Montana Grain Growers Association.

Since March 2018, Montana wheat farms have seen their sales to China drop to almost nothing after having annual sales of $65 million in the prior five years, she said.

The Best Option For Getting Quality Positive Reviews For Your Business.

4 Reasons All Photographers Need To Sign Up With TOP.

3 Reasons Top Is A Leader For Ebooks To Read.

3 Reasons To Advertise With TOP as Soon As Possible.

2 Main Reasons To Think About Going With TOP Translation Platform

3 Steps To Getting Great Online Reviews.