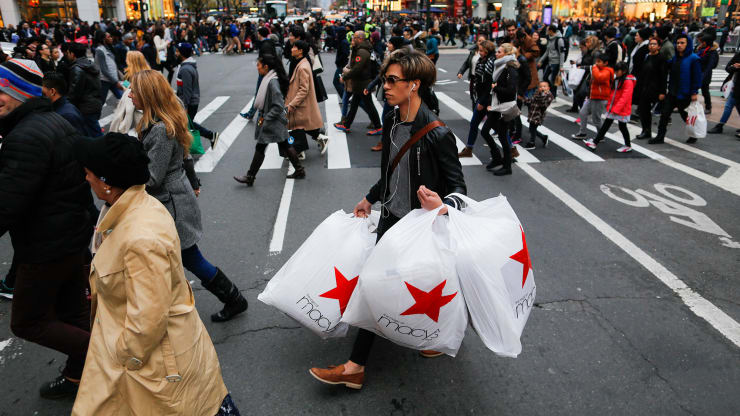 Only geopolitics can sink the US into recession, Blackstone’s Schwarzman says

The U.S. economy is actually looking “quite robust” thanks to a healthy labor market and higher consumer spending, Steve Schwarzman, the co-founder, chairman and CEO of Blackstone Group, told CNBC Monday.

A slew of disappointing economic data last week suggested the ongoing U.S.-China trade war was starting to take its toll, fueling concerns of a possible recession. On Tuesday, a gauge of U.S. manufacturing showed the lowest reading in more than 10 years for September.

But Schwarzman noted that manufacturing accounts for about 11% of the U.S. economy. “The U.S. consumer is around 70%, maybe even a little more, of the U.S. economy …. (and) the 70% is doing quite well,” he told CNBC’s “Squawk Box Europe” Monday.

“Why is that? Because we have full employment in the U.S. — 3.5% unemployment it’s the lowest since 1969 — that’s pretty amazing. This shortage of labor is starting to create higher wages for workers …. (and) what people are doing with that money is they’re spending it. So, we have 70% of the economy that is quite robust. The only thing, I think, that’s going to disturb that is some kind of geopolitical problem,” Schwarzman said.

“I don’t see a normal business cycle taking the U.S. into a recession,” he added.

Consumer spending rose a meager 0.1% in August from the previous month, according to data from the U.S. Commerce Department in September. The U.S. then slapped a 15% tariff on around $112 billion of Chinese consumer goods in September.  J.P. Morgan estimated that the new tariffs, alongside those due in mid-December, will cost the average U.S. family $1,000 a year.

However, concerns over a possible slowdown were eased Friday following U.S. Bureau of Labor Statistics data that showed that the economy added 136,000 jobs in September.

Although economists polled by Dow Jones expected an increase of 145,000 jobs, market sentiment was buoyed by the unemployment rate falling to 3.5%, a 50-year low.

Giving his judgment on the fractious state of trade talks, Schwarzman said the U.S. “is asking China to change.”

“China was a lesser-developed country. It had GDP (gross domestic product) per capita, 40 years ago, of a few hundred dollars a person. It’s now $10,000 per person. It’s the greatest economic miracle perhaps in world history,” he said.

Schwarzman noted that China had become economically successful, at least in part, by “staying behind big tariff walls, taxes, closed markets or selectively open markets, government subsidies, seizing intellectual capital — a variety of things we don’t do in the West, in the developed world.”

“The U.S. has called it now saying ‘we want change’, and there are many in China that say that’s OK, but there are others that don’t want to change. So, we have three parties at the table, we have the U.S., the Chinese reformers and the Chinese hardliners. We’re going to find out this week what the Chinese positions are and then the U.S. will have a chance to take a look at it,′ he said.

Benefits of Digital Marketing to Your Business.

Where To Get Great Ebooks For Reading. To more onlinelobbying.com.

Get Expert Help With Press Release Services Through TOP.

4 Reasons All Freelancers Should Be Working With TOP.

Why TOP Platform Is A One Stop Shop For Making Money Online.

TOP Helps You Earn Money As A Social Media Influencer From Home.

Looking For The Right Ebooks To Read With TOP.

2 Benefits To Getting Reviews Through TOP.

One Reason You Should Partner With TOP Today. To more >>> online translators platform.

3 Reasons Why You Should Trust TOP For Finding Translation Services.