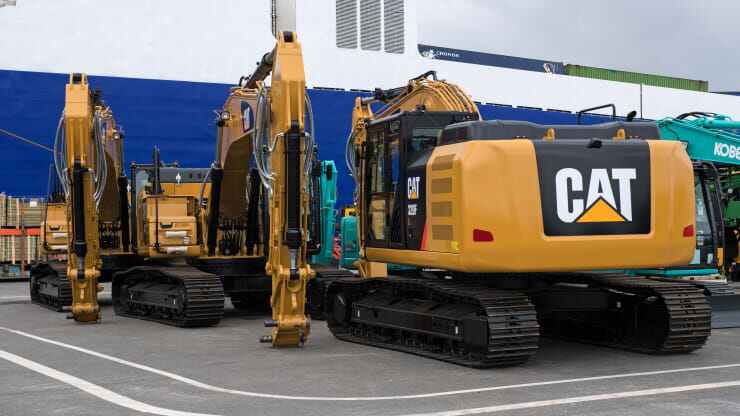 Caterpillar – The heavy equipment maker reported adjusted quarterly earnings of $2.63 per share, beating the consensus estimate of $2.37. However, revenue came in below forecasts, and Caterpillar also issued a weaker-than-expected full-year outlook. The company said global economic uncertainty would continue to pressure sales this year.

Navistar – The truck maker received an unsolicited buyout offer from Volkswagen’s commercial truck unit Traton for the part of Navistar it doesn’t already own. The offer amounts to $35 per share, or $2.9 billion, compared to yesterday’s close of $24.07. Volkswagen and Traton currently own about 16.8% of Navistar.

Exxon Mobil – The energy giant earned an adjusted 41 cents per share for the fourth quarter, 2 cents below estimates, but revenue did exceed Wall Street forecasts. Exxon said short-term supply issues in its downstream and chemicals businesses impacted its results.

Honeywell – The industrial conglomerate beat estimates by 2 cents with adjusted quarterly profit of $2.06 per share, but revenue was shy of forecasts. Honeywell also gave a weaker than expected revenue guidance, saying the 737 Max production halt will hurt growth. Honeywell makes a variety of 737 Max components.

Colgate-Palmolive – The consumer products company matched Street forecasts with adjusted quarterly earnings of 73 cents per share, with revenue beating estimates. Colgate did see a 5% jump in organic sales during the quarter and expects an organic sales growth rate of 3% to 5% this year.

Amazon.com – Amazon earned $6.47 per share for the fourth quarter, well above the consensus estimate of $4.03. Revenue also exceeded analyst forecasts, powered by a robust holiday season as well as strong results for advertising and cloud computing.

IBM – IBM CEO Ginni Rometty will step down in April after eight years on the job. She will be succeeded by Arvind Krishna, head of IBM’s cloud computing business. Rometty will remain as executive chairman through the end of the year.

Amgen – Amgen reported adjusted quarterly profit of $3.64 per share, 17 cents above consensus forecasts, with the biotech company’s revenue also beating estimates. However, Amgen gave a weaker-than-expected full-year forecast, due to lower interest income and its recently acquired stake in China’s BeiGene, which is currently unprofitable.

Electronic Arts – Electronic Arts reported adjusted quarterly profit of $2.52 per share, a penny above estimates, with revenue essentially in line. However, the video game maker gave a weaker-than-expected current-quarter revenue forecast, in part due to a delayed launch for its “NBA Live” game.

Visa – Visa matched Street forecasts with quarterly earnings of $1.46 per share, but the payment network operator’s revenue came in below estimates. Visa also saw a 14% increase in operating expenses during the quarter as it spends more on rewards and incentives for cardholders.

Levi Strauss – Levi Strauss reported adjusted quarterly earnings of 26 cents per share, 5 cents above estimates, but the apparel maker’s revenue was slightly short of forecasts. The company also gave an upbeat full-year earnings forecast, as well as announcing a $100 million stock buyback and initiating a dividend of 8 cents per share. Levi Strauss also announced it has about half its stores in China due to the coronavirus outbreak and will take a financial hit as a result.

Marathon Petroleum – Marathon Petroleum is exploring the sale of its Speedway gasoline station division, according to a Bloomberg report. Marathon said last year it was seeking to spin off Speedway, which has about 4,000 locations in the U.S.

Johnson & Johnson – J&J was ordered by a California judge to pay a $344 million fine, in a case accusing the company of deceptively marketing its surgical mesh devices. The company said it would appeal the decision, adding that it “responsibly communicated the risks and benefits” of the device.

The Online Publishers “TOP Platform” has helped many clients to find whatever it is that they need as far as finding Ebooks to read, and accessing other digital media solutions today.