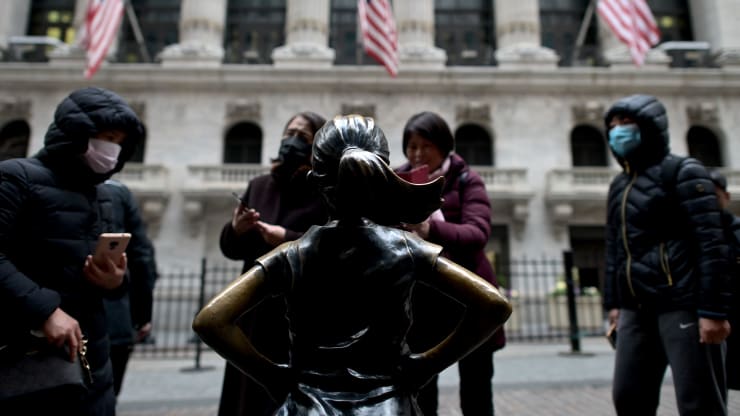 Stock markets around the world are tumbling into correction territory as fears of a possible pandemic escalate, with cases of the new coronavirus surging outside China.

More than 83,000 people in around 50 countries have now been infected. World Health Organization Director General Tedros Adhanom Ghebreyesus said on Thursday that the virus has “pandemic potential.”

The MSCI ACWI and MSCI World index, both equity benchmarks that track global firms, are both down by around 9% since Monday and are set to mark their worst week since 2008.

In Europe, the Stoxx 600 fell 3.6% to close Thursday’s session in correction territory and was down a further 4.4% after the first hour and a half of trading on Friday, also heading for its worst week since October 2008.

Friday has so far seen the first cases of the virus confirmed in New Zealand, Belarus, Lithuania and Nigeria, the most populous country in Africa.

Valentin Marinov, head of G-10 FX research at Credit Agricole, told CNBC’s “Squawk Box Europe” on Friday morning that the outbreak has the potential to trigger the next global recession.

Stateside, the Dow plunged nearly 1,200 points on Thursday, its biggest single-day point drop in history, to fall into correction territory as the 30-stock average also heads for its worst week since the 2008 financial crisis.

The S&P 500 and Nasdaq both fell into correction from record highs just six days ago, and U.S. markets are expected to extend their losses at Friday’s open, with the Dow seen more than 700 points lower.

Investors worldwide have flocked into perceived “safe-haven” assets, most notably government bonds. The yields on the U.S. 10-year Treasury note and 30-year Treasury bond, which move inversely to price, plunged to all-time lows during European morning trade on Friday, while yields on German bunds and U.K. gilts also sank.