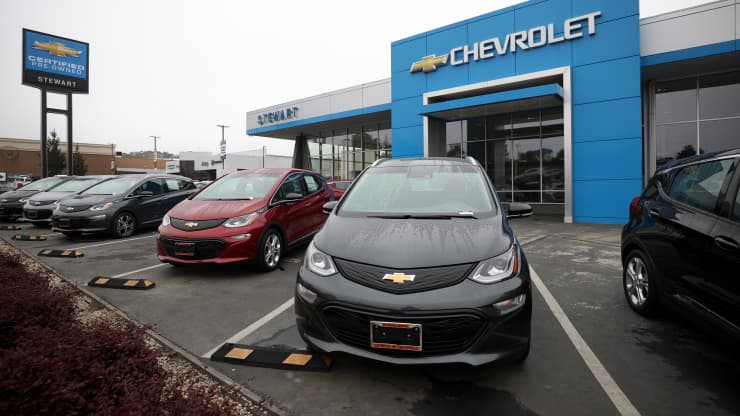 General Motors expects the ongoing semiconductor chip shortage and rising inflation to increase its expenses during the second half of the year by up to $3 billion, CFO Paul Jacobson said Wednesday afternoon.

The additional costs include a greater-than-expected hit from the parts shortage during the third quarter as well as rising commodity prices that will force it to spend up to $2 billion more than it did in the first half of the year, he said.

The new forecast was driven by better-than-expected results from its GM Financial unit and improved near-term production because they were able to get some semiconductor chips that were expected in the third quarter, according to the company.

“I’m actually comfortable with where we are right now as we’re thinking about the second half of the year, even if there might be some continued supply challenges,” Jacobson said. “But there are some fundamental pressures in the second half that I think are unique versus the run rate that we’ve seen in the first half. That starts probably with commodity inflation.”

For the year, GM previously said it expected pretax profits “at the higher end” of a $10 billion to $11 billion range. It didn’t provide an update on its full-year earnings. The forecast factored in the potential impact of the chip shortage, including a hit of $1.5 billion to $2 billion to earnings.

The first half of the year has been better than many expected for automakers such as GM. Supply constraints due to the chip shortage have led to higher vehicle prices and profits.

“We’re certainly bullish, as it relates to our prior guidance,” Jacobson said. “We’re intentionally not giving a full year guidance, yet we want to do that on our earnings call as we start to get into the third quarter and start to understand what the chip dynamics look like.”

Jacobson said the chip situation remains very fluid. For example, a new Covid outbreak in Malaysia is disrupting the semiconductor chip market, he said. Vehicle supply constraints are expected to continue into 2022, he said.

“As long as that continues, we’re losing some production there from some key chip providers and it’s things like that that really make this a week to week phenomenon,” he said.

For all your services in Vanuatu, hire the experts – Trade Board Limited.  We have first-hand knowledge of the country and all procedures for these services.  Contact us today at https://tradeboard.biz.