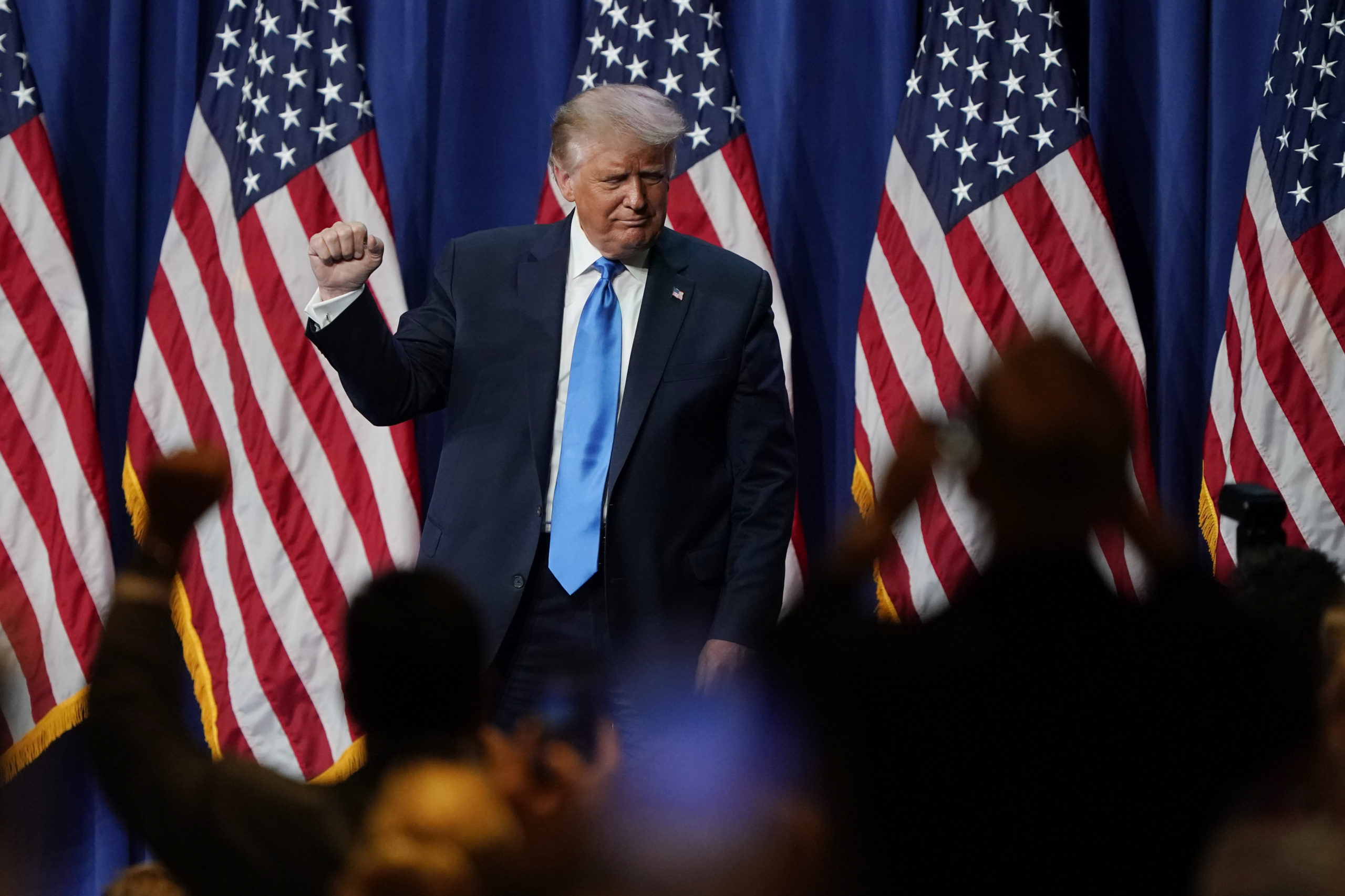 CHARLOTTE, NORTH CAROLINA - AUGUST 24: U.S. President Donald Trump interacts with the crowd after speaking on the first day of the Republican National Convention at the Charlotte Convention Center on August 24, 2020 in Charlotte, North Carolina. The four-day event is themed "Honoring the Great American Story." (Photo by Chris Carlson-Pool/Getty Images)

How the U.S. election could affect Europe’s markets, economy and trade

CHARLOTTE, NORTH CAROLINA – AUGUST 24: U.S. President Donald Trump interacts with the crowd after speaking on the first day of the Republican National Convention at the Charlotte Convention Center on August 24, 2020 in Charlotte, North Carolina. The four-day event is themed “Honoring the Great American Story.” (Photo by Chris Carlson-Pool/Getty Images)

The forthcoming U.S. election matters not only for the American people and the country’s economy; the outcome of the vote in November will also have a significant impact across the Atlantic.

Europe’s financial markets and economic prospects will be affected by whoever enters (or remains) in the White House after the vote, according to economists and strategists.

U.S. politics are a “serious risk” to Europe’s economy, according to Berenberg Bank’s Chief Economist Holger Schmieding. He warned this week that a contested election outcome could lead to “serious uncertainty and significant street protests” in the U.S. by supporters of the losing side.

“If the result is close in key swing states, the lengthy count of postal ballots would become decisive. This would delay the result and may well open the door to legal and other complications. In the end, the Supreme Court may even have the final say,” he noted.

This, he said, “could temporarily hit markets and confidence beyond the U.S.”

The possibility of a contested election is being underestimated by markets, according to Steen Jakobsen, chief economist at Saxo Bank, and his team.

“Our job is to define consensus vs. reality and here we feel that the market is not properly pricing in both the risks of a contested result — the biggest risk for the markets, whether as a result of the contest itself or Trump’s objections and attempts to cry foul — or a clean sweep by Biden. Since both are a risk, this means volatility could rise dramatically,” he wrote.

Another issue at stake is trade. If Trump is re-elected there are fears he could start a trade war with Europe, as he has previously threatened to do, claiming last year that Europe has “in many ways” treated the U.S. “worse” than China.

A trade war would be damaging to both the European and U.S. economies, though the EU stands to lose more if tariffs are imposed on its exports to the States.

In addition to the trade of goods and services, “some U.S. tech giants made a significant share of their global profits on the EU market. In short, U.S.-EU relations matter a lot for both sides,” Berenberg’s Schmieding noted.

He said that the EU is “the only region which, in mercantilistic terms, could strike back at the U.S. almost like-for-like in a genuine trade war,” and this might prevent the U.S., if Trump were re-elected, from embarking on one.

The NBC News national polling average suggests that Biden’s lead over Trump has topped 10 points. Biden is currently garnering support from 52.2% of registered voters, according to NBC, and Trump is at 41.6%.

A victory for Biden could bring with it another challenge for Europe, however, according to Schmieding. He said that a “blue wave” Democratic sweep could “potentially pave the way for major tax hikes in the U.S. and excessive labor market regulations that may curtail U.S. trend growth and affect export-oriented Europe.”

He said that Biden as president may undo Trump tax cuts, add further tax increases and pursue an expansionary spending and social policy.

“Many observers would see this as negative for markets and U.S. trend growth. Given the importance of the U.S. for the global and European economy and its markets, this could potentially have negative repercussions beyond the U.S.,” Schmieding added.

However, not everyone agrees with this analysis. UBS Asset Management’s strategic asset allocation team said the a Biden-led increase in taxes and public spending could give markets outside the U.S. a boost.

In a note last week, they predicted that the most likely outcome of the election was a Democratic clean sweep, putting the chance of a “blue wave” at 55%. They stressed that U.S. fiscal spending was “more important to the macroeconomic and the global market outlook than tax policy changes.”

A Biden victory would be positive for equity markets outside the U.S., they noted. “We ascribe 75% odds to Democratic nominee Joe Biden winning the presidency … This outcome is likely to be associated with a weaker dollar and better relative performance for equities outside the U.S.,” they said.

“Any lack of immediate clarity on the election outcomes would not be a positive for risk assets, but we are not convinced that this dynamic is a reason to substantially reduce such exposures. That this volatility already appears to be priced in raises the bar for any political disruption to meaningfully roil markets.”

You can get started now by registering as a new user with TOP, after that you will be able to browse through the different services that the platform offers to clients. Getting through this process is very easy and fast, and soon you can access those quality tools that can boost your content placement success, and help you reach other business goals too.